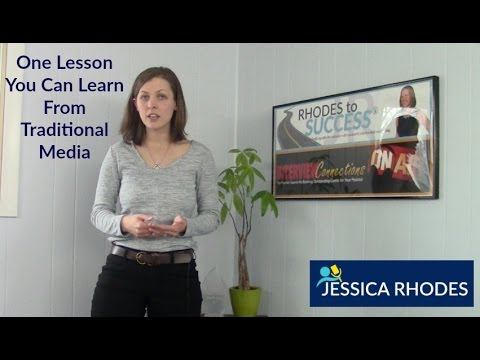 Hey everyone. Thanks for joining me for today’s episode of Interview Connections TV. I am Jessica Rhodes, your host, here to help you rock the podcast from both sides of the mic. In traditional media, traditional publicity, it’s very common that the host or the producer of a show provide the guest with a lot of information from the questions, exactly when they should be calling in.
There’s a lot of prep work that goes in to having an interview. Similarly, a guest usually is going to have a whole media kit. They’re going to have an agent working out all the details. There’s going to be a lot of prep work leading up to this interview.

Most of the time, podcasters who are typically not people that are trained in traditional media or traditional broadcasting, they are not going to all of these lengths to do all of this prep work. I think that’s okay. I think it’s all right that we’re not doing a ton of extra prep work, in that the conversations are raw. There are 2 people connecting and not necessarily mastering this big production.

However, what we can learn from traditional media and more well-trained broadcasters, is that there does need to be prep work and there does need to be ample communication between the host and the guests. One of the complaints that I have gotten for people that are interviewed in podcasts, is that they say, “The podcaster they scheduled me but I haven’t heard from them. I don’t know if the interview’s 30 minutes, if it’s an hour. Are they going to pre-script questions? Is it going to be conversational?”

I’m not saying you should pre-script a ton of questions and do a ton of prep work, but as a host you need to make sure that your guest knows what to expect. Make sure that there is communication with your guest leading up to the interview. That’s one thing we can learn from traditional media, is that when you are booked on a television station or a radio or some type of traditional media outlet, there is going to be an agent that is making sure you know what you’re doing and when things are due and how the interview is going to go down.

Podcasters, guest experts, make sure you take that lesson from traditional media and professional broadcasters, and be prepared. Communicate with one another before the interview so nobody is disgruntled or frustrated or confused about what to expect. You can check on my podcast at RhodesToSuccessPodcast.com. If you need help getting interviews, getting guests for your show, check out InterviewConnections.com to learn how we can work together.

Thanks everyone. I am Jessica Rhodes here to help you rock the podcast from both sides of the mike. We’ll talk to you next Tuesday.