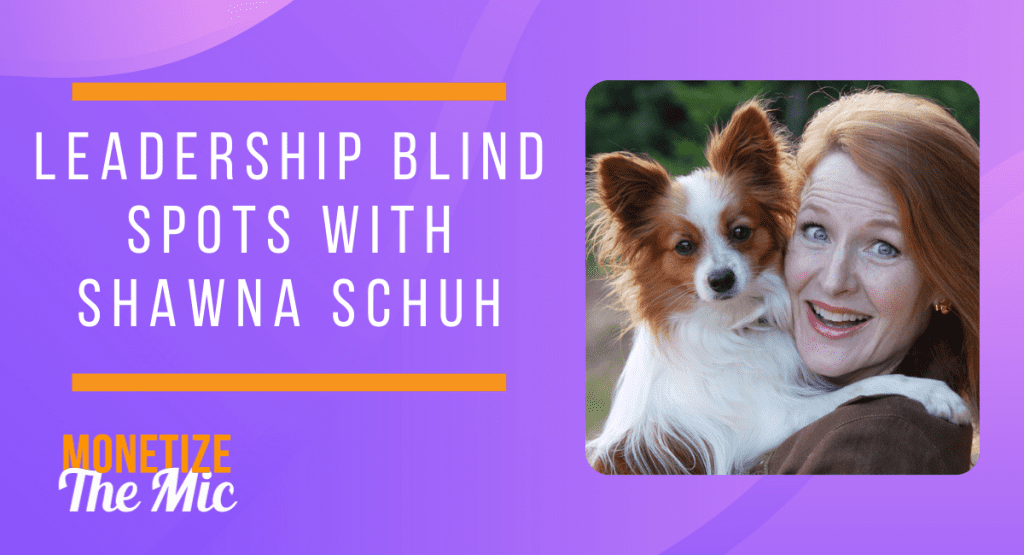 Jess and Margy are the co-owners of Interview Connections, the first and leading podcast booking agency. This is the podcast to teach you how to transform your business and life with the power of visibility and strategy! On this episode of Monetize the Mic, Jess sits down with Interview Connections client Shawna Schuh to discuss leadership blindspots!

Shawna Schuh is an eccentric thought leader, a skilled executive leadership coach, a two-time TEDx speaker, and a lifetime adventurer.

In addition to her hard-earned Master’s Certificate in Neuro-Linguistic Programming, Shawna has three decades’ experience working closely with top organizations such as Nike, Columbia Sportswear, Fashion Group International, and the National Speakers Association.

She knows leaders thrive with an advocate who questions their thought process, and her unconventional perspective gives her some unexpected questions to ask. Shawna shares a unique perspective so that the information and ideas she promotes stick and work.

Jess asks, what are some of the blindspots that exist in leadership?

Shawna begins by discussing one of the biggest blindspots that challenge leaders, which is relying on your team to tell you what’s wrong. Your team isn’t going to tell you what your leadership blindspots are because their job is on the line! A big mistake a leader can make is assuming that their team is 100% on board with every initiative in the company.

Shawna uncovered another leadership blindspot: leaders are telling. Leaders will say to her, “Well, I told them this. I told them why.” But it’s not actually communication. Some leaders also sell ideas and initiatives, instead of really having a two-way conversation about it.

Shawna also discusses that some leaders have a blindspot in allowing certain things. If a leader allows frequent bad behavior from an individual, it affects the entire team.

She is thrilled to see that many leaders are educating themselves, talking to other leaders, and strategizing. Shawna emphasizes that leaders need to ask questions to become better leaders. She also notes that sometimes leaders know their values, but they don’t actually feel them. They’re not committed to them. Leaders need to absolutely commit to and feel their core values.

Most leaders do not know what’s wrong with their business. They don’t have any idea of what’s being said or being done under them, even though they think they know.

Jess asks Shawna, “When should leaders ask questions, what kind of questions, and with what context?”

First, Shawna recommends that leaders figure out their intent. Shawna believes that a check-in is just an interruption. Leaders should ask themselves, “What am I trying to accomplish here?”

Leaders come to Shawna and say, “I do check-ins with all my people.” Shawna asks, “What if you stopped and said – ‘I’m calling you to find out what one good thing happened today already?’” You’re going to be asking them something they’re not used to giving. Another example might be, “Rate the meeting you just had with that client on a scale of 1 to 10. What could you have done to make it a 10?”

Most leaders are checking in to make themselves feel better, but they might be triggering the team, or just interrupting them.

Shawna believes that check-ins are about leaders feeling anxious that work isn’t being done, or not being done well enough. Instead, she recommends having a pre-scheduled time to meet with a purpose. Instead of a check-in, maybe do a progress report: “What’s your progress? What’s preventing that progress? Tell me the process and share with me the steps you are taking.”

The best leaders are the best questioners. Don’t ask, “What were you thinking? Why would you do it that way?”

“Why” questions are usually the poorest questions. That question doesn’t give you the answer that you want. Shawna asks, “What if you just shifted it to, how could I do that differently in the future?”

You can connect with Shawna at Shawnaschuh.com and take a free quiz to uncover your leadership blindspots!

If you want to learn the A-Zs of monetizing the mic as a guest expert on podcasts, register for our free 5-Day Podcast Guesting Masterclass! Click the link to save your seat! interviewconnections.com/livemasterclass