Our Monetize the Mic Virtual Conference kicks off on August 10th! Save My Seat
Our 5-day Podcast Guesting Masterclass kicks off on January 25th!
Click here to save your seat now! 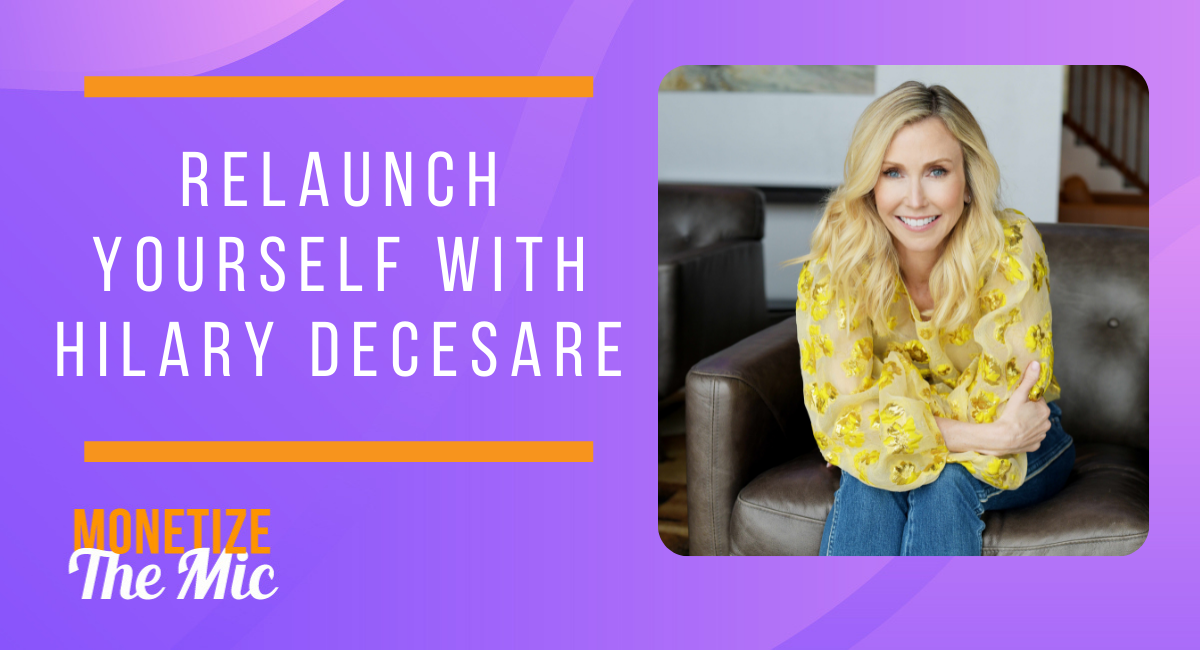 Relaunch Yourself with Hilary DeCesare

Jess and Margy are the co-owners of Interview Connections, the first and leading podcast booking agency. This is the podcast to teach you how to transform your business and life with the power of visibility and strategy! On this episode of Monetize the Mic, Jess got to speak with Interview Connections Client Hilary DeCesare about relaunching yourself!

Hilary DeCesare is an award-winning entrepreneur, host of The Silver Lined ReLaunch, and is featured on many major networks including ABC’s The Secret Millionaire.

Hilary just launched the much-awaited 6-month business program The Fired Up Entrepreneur from The ReLaunch Co. This business program helps female entrepreneurs looking to launch or relaunch their business. It helps them take the right steps, in the right order, towards lasting business success.

The program stands out because it not only takes away the confusion and overwhelm on where to start, and how to start but outlines what actually works or is not working for female entrepreneurs in the changing business landscape. It’s ideal for those that have a well-formed business idea or are tired of the one-win here and there approach or handful of fast fails that’s keeping their already existing business small.

Hilary specializes in launching or relaunching businesses by giving the proven foundational elements and steps needed when navigating the start to finish of building a business according to her Make, Grow, Keep Method.

Hilary firmly believes “Now is your time”, and partners with women that are ready to go all in and hit the reset button. This starts with covering the 6 main pillars in her program: Clarity, mindset, time management, marketing, sales, and leadership.

She saw a need to quiet the white noise in the business space that seemed to only cater to those that wanted to tell how, and created the program to show how to give any female entrepreneur the fast-pass to launching and relaunching a business saving them time, energy, and wasted money.

The ReLaunch Co. takes away the overwhelm and gives the simple A-Z steps to women entrepreneurs bridging the heart to the head to one’s higher self, so that not only can they have success in their business, but also have a lifestyle filled with possibilities inside the acclaimed new program The Fired Up Entrepreneur.

Hilary is incredibly passionate about helping people in midlife. Jess asks, “Where does that passion come from? What was the moment where you said my purpose is to help people relaunch midlife?”

Hilary explains that midlife has become a massive area. It can be anywhere from age 35 to 55. She hasn’t talked to anyone who isn’t going through some kind of relaunch right now. People ranging from college graduates to 60-70-year-olds are realizing they aren’t where they want to be. A lot of people feel as if they need to love their lives, love their jobs, and the reality is that they’re not even at the like stage. They keep it to themselves and they don’t share that with others because there are a lot of feelings of guilt and shame associated with not completely loving your life. This kind of midlife identity crisis can happen at any age.

What Hilary realized is, we all are looking on the outside asking ourselves, “How can I get happier? What’s wrong with me? What can I do?” We all are searching for the silver bullet. “If I find the right guy or, if I get the right job” etc, then we think that we will be happy. That feeling is only fleeting – that man or that job is not going to give you what you need for long-term happiness.

Hilary’s ReLaunch program works because it takes you through a process. Her program is not a “take a pill and everything is better” type of program. It is built on transitions that lead to transformations.

Hilary reminds us that we can’t look back on the things that have happened to us and ignore the silver linings that got us to where we are. After 100+ interviews on Hilary’s podcast, there hasn’t been one person who she’s interviewed that would change some of the most horrific relaunches and transitions they’ve been through because it was those transitions that got them to where they are now.

They are where they are because of what they’ve been through, not in spite of it.

If you’re going through a transition right now, it’s so important to hear Hilary’s messages. She is so passionate about helping people to understand how they can relaunch themselves and find the silver lining of their obstacles.

Hilary has seen incredible success, but it’s the hardships she’s endured that really help inspire people. Her failures have brought her to be a better coach, better business leader, and have helped her to share more and teach more.

At one time, Hilary was working with an online security company focused on children’s safety online, and this company’s mission was very close to her heart.

Hilary was fundraising for this company and was pitching the product on a very large stage in front of a crowd. She had a 103 fever and felt like it was a total bust. After she got off stage, her phone rang and a man said he could help her raise two million dollars for that company.

Hilary was amazed. The man wanted her to fly to New York to meet up with his business partner. Immediately upon meeting him, Hilary had the intuition that this man was not good. She ignored her intuition, sat, and listened. Hilary decided she couldn’t work with him.

Eventually, after going back and forth, she did end up having to work with that man. Her gut told her that it was not a good idea, but she continued to ignore it. Five years later, the entire company just combusted. The day it was all done, it was found out that the man was being investigated for a Ponzi scheme, and went to federal prison for 3 years.

Hilary asked herself, “How do I relaunch out of this? I’ve been coaching people running other businesses. How do I become the entrepreneur of me?”

Hilary began to still do what she knew to be true about business but she allowed for that higher self to come in. She allowed for that emotional connection of the heart. Hilary uses a 3H model: the heart to the head to the higher self. She knows that if you’re not leaning into all three of those areas,  you’re never gonna scale the way you want because you are not where you should be. You’re not in that place that you know you’re supposed to be. Would Hilary go back and change anything? No, she would do it all over again.

Until you start knowing what you don’t know, that’s when things really start to happen. You reach a point like, “Why am I not happy? Why am I not able to create more wealth or freedom for myself?”

For people going through a relaunch and they’re coming up against fear and breakdowns. Jess asks Hilary if she can speak to the importance of feeling those emotions?

Our world is starting to value emotional intelligence in a way that it never has before. Emotions are no longer being viewed as weaknesses. Hilary used to work in corporate where it wasn’t okay to be emotional. You had to show up very masculine every day.

There’s so much going on in that resistance to feeling, feeling like you have to be happy, or you have to be fearless. You have to feel the fear to get on the other side of it.

Hilary recommends that we ask ourselves, “Is it showing up in my body?” Our bodies give us every indication – and yet we often ignore it. When you realize that your body is really telling you something and you ignore it, that’s when things start to build up.

Hilary asks us to think about instead of pushing it off, ignoring it, and putting walls up, you instead think about why am I having that feeling in my chest?

Why is it that I’m uncomfortable right now? Take a pause, because your higher-self intuition is literally trying to get to your head, and trying to give you some really important information. Try and listen to it.

She explains that so often we are being given a signal, and our bodies are telling us something. If we can acknowledge that something is going on, we’ll build this muscle. That’s when we become powerful and we really can move forward!

People tend to ignore these signals because they just don’t really want to deal with them. But Hilary explains that they’ll just keep showing up somehow. Hilary calls them BUGS: Beliefs Under Ground Surfacing.

At night you see that one ant on your kitchen counter, and you kill it. Then when you wake up the next morning you see hundreds of ants because you didn’t really deal with it!

We keep pushing down our BUGS and then all of a sudden these limiting beliefs end up just saying, “I’m tired of knocking, you’re not opening the door. I’m gonna blow your door off!” That’s when you’re in that state of crisis. But you don’t have to be there! You can instead be in a state of relaunch which is going to take you out of crisis mode and get you on that path to get you to your next chapter.

You can connect with Hilary at www.therelaunchco.com!

ENTER YOUR NAME & EMAIL BELOW TO REGISTER FOR OUR FREE BOOTCAMP KICKING OFF ON DECEMBER 14th!

ENTER YOUR NAME & EMAIL BELOW TO REGISTER FOR OUR BOOTCAMP MASTERCLASS KICKING OFF ON Aug 2nd – 6th!

ENTER YOUR NAME & EMAIL BELOW TO REGISTER FOR OUR FREE BOOTCAMP KICKING OFF ON DECEMBER 14th!