Join us for our Podcast Guesting Masterclass Monday Sept. 20-24 at 12pm EST! Save My Seat
Skip to content 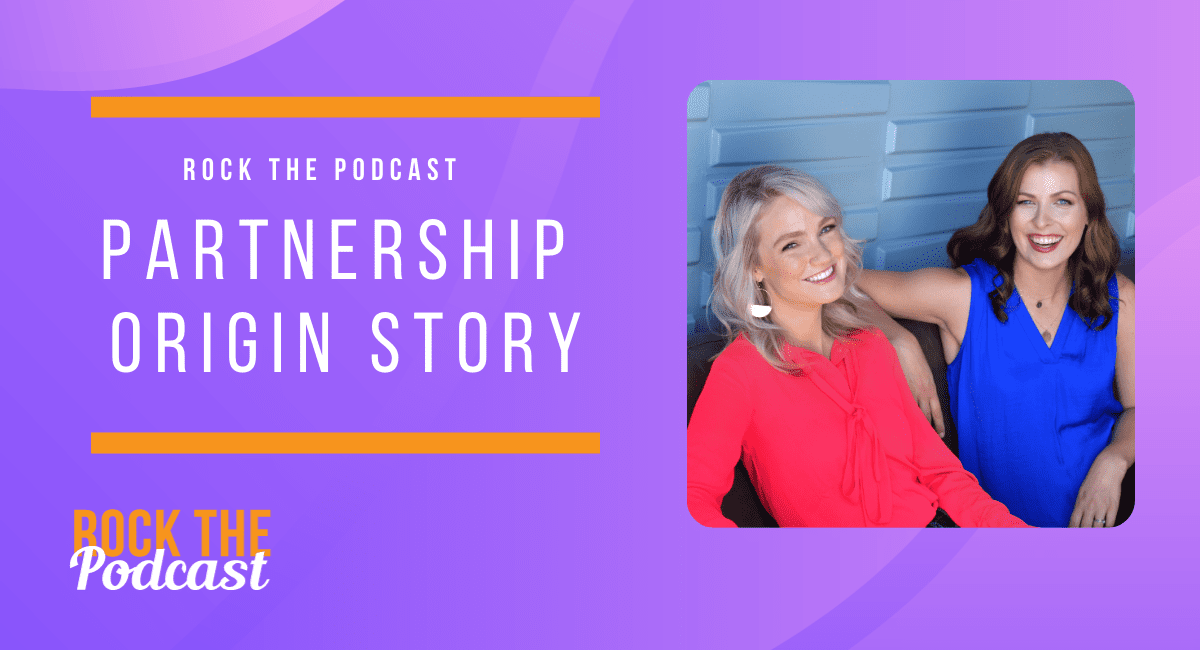 Jess and Margy are the co-owners of Interview Connections, the first and leading podcast booking agency. This is the podcast where you will learn all about podcast guesting and how to leverage podcast interviews to grow your brand awareness. On today’s episode of Rock the Podcast, Jess and Margy talk about their partnership origin story!

Margy loves telling her story because she wants listeners to reassured that even if it doesn’t seem like things are going the right way – keep going!

She graduated college with dual degrees in art and Latin, but Margy felt like she didn’t know where to go with her degrees. She ended up finding a job on Craigslist, in a door-to-door fundraising company. Jess was the canvas director for that company, and interviewed and hired Margy herself!

An opportunity arose for Margy to travel to Austin to help open a new office for the company. When it was time for Margy to return, she called Jess and said “Sorry, but I’m staying here in Austin!”

Margy was at a place where she didn’t know what she wanted to do and was following her impulses.

After living in Austin for a little while, Margy traveled to Taiwan. She lived there for two years working as an English teacher. She loved traveling, but she never felt like she could find her calling. While living in Taiwan, Margy received the life-changing news that her father had died by suicide.

Among the many other things that come up during a close family member’s death, Margy had to frantically find a new home for her dad’s cat, Kitten. She had posted on Facebook to see if anyone could foster the cat, and even though Jess and Margy had mostly lost touch over the years, Jess commented on the post and volunteered to foster Kitten.

Kitten was the catalyst to bring Jess and Margy back together again. About a year later, Jess started working from home as a VA. Soon after that, she created her first business, Interview Connections.

After a few years, Jess began hiring 1099 contractors for Interview Connections, and Margy was at the top of her mind for people to hire.

Margy started working at Interview Connections as a booking agent contractor. She started to become obsessed with entrepreneurship and business, even though she had absolutely no background in that whatsoever. The more podcast episodes she listened to, and the more she got to know and understand her clients, the more Margy felt drawn to the world of entrepreneurship.

Unfortunately, Margy began to deal with some more trauma in her personal life. She had a bad breakup that forced her to pack up all of her stuff and move from Colorado back to her mom’s house in Rhode Island. She really felt like she had hit rock bottom.

What Margy didn’t know yet, was that moving back to Rhode Island was the first step in her journey to becoming CEO of Interview Connections.

Jess had decided to switch from 1099 contractors to W-2 employees, and she asked Margy to be her first-ever employee. At the time, Margy did not want to relinquish the freedom she had as a 1099 contractor. She was bitten by the entrepreneurial bug, and Margy felt like becoming an employee was a step backward. However, she accepted the offer anyway.

There were so many moments in Margy’s journey that seemed like nothing was going to plan. Even though she felt like everything was going wrong, she was actually on the right path.

Jess was Margy’s boss, but it truly started to feel like a partnership. They cried together, they celebrated together, and they rose to the challenges of a new business together. By the end of 2017, Jess and Margy felt like they were starting to get the hang of things.

In 2018, Jess was starting to feel really burnt out. The weight of running the business alone was beginning to weigh on her. She knew that Margy should be her business partner. They began to discuss the options available for a partnership.

Margy knew that she wanted to have 50% equity in the business. She wanted to feel like she had just as much of a stake in the success and failure as Jess did. Jess initially offered less than 50% equity, and Margy was fully authentic in her decision to graciously not accept that. Margy was firm that she wanted equal risk and equal reward.

Jess trusted her intuition and her gut. She offered Margy 50% equity in the company and they became equal co-owners. It has been such an incredible journey for Margy to start as a 1099 contractor and become the CEO.

There is so much possibility when it comes to collaboration. The partnership of Jess and Margy is one of the reasons they were able to grow the company to multiple seven figures!